3 Famous Food Brands – How Well Do Americans Remember Them?

We all have our favorite food brands and for a number of reasons. Choosing them can be a matter of reliability, cost, aesthetic appeal or just familiarity. It’s likely that you reach for one brand of ketchup or mustard over another as you complete your grocery list. Brands are constantly fighting for attention creating expensive advertising campaigns, redesigning their logos and attempting to understand the millennial market. But do their efforts really pay off? How well do we even remember the logos of brands we reach for daily?

In an effort to better understanding the role logos play in branding, we reached out to the people who consume them. Our study looks at eight of the most infamous food brands Americans have seen on a near daily basis since childhood. Using the original logo, we re-designed and altered them based on three simple things: color, font and design details, then tested women and men of various demographics to see what they thought was the correct option. How well do people remember the brands they love so much? Keep reading to find out how the result for three famous food brands stacked up.

With over 50 uses for baking soda, Arm & Hammer is easily one of the most well-known kitchen and household items. Baking soda sold at a rapid pace when women were full-time homemakers, but as women’s role in society evolved, home baking decreased and so did Arm & Hammer’s role in the kitchen. To stay relevant, they continued to develop uses for their bicarbonate soda from toothpaste to cat litter, and with that, came changes to the logo.

The Arm & Hammer logo has evolved to keep up with product changes and new uses for baking soda, but let’s not forget where the brand started in 1867. Below shows the difference between the logo’s start to how you now find it in the grocery aisle. 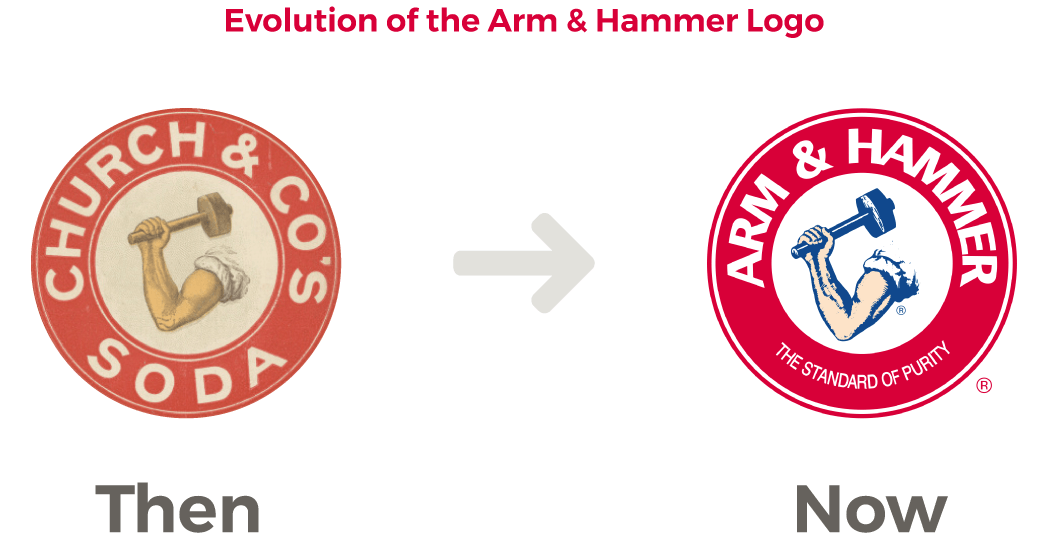 Arm & Hammer is easily recognizable for its bright red logo and muscular arm raising a hammer. This iconic American brand is well recognized, but changes in font and small design tweaks like facing the arm and the hammer in an opposite direction added variety in the responses. 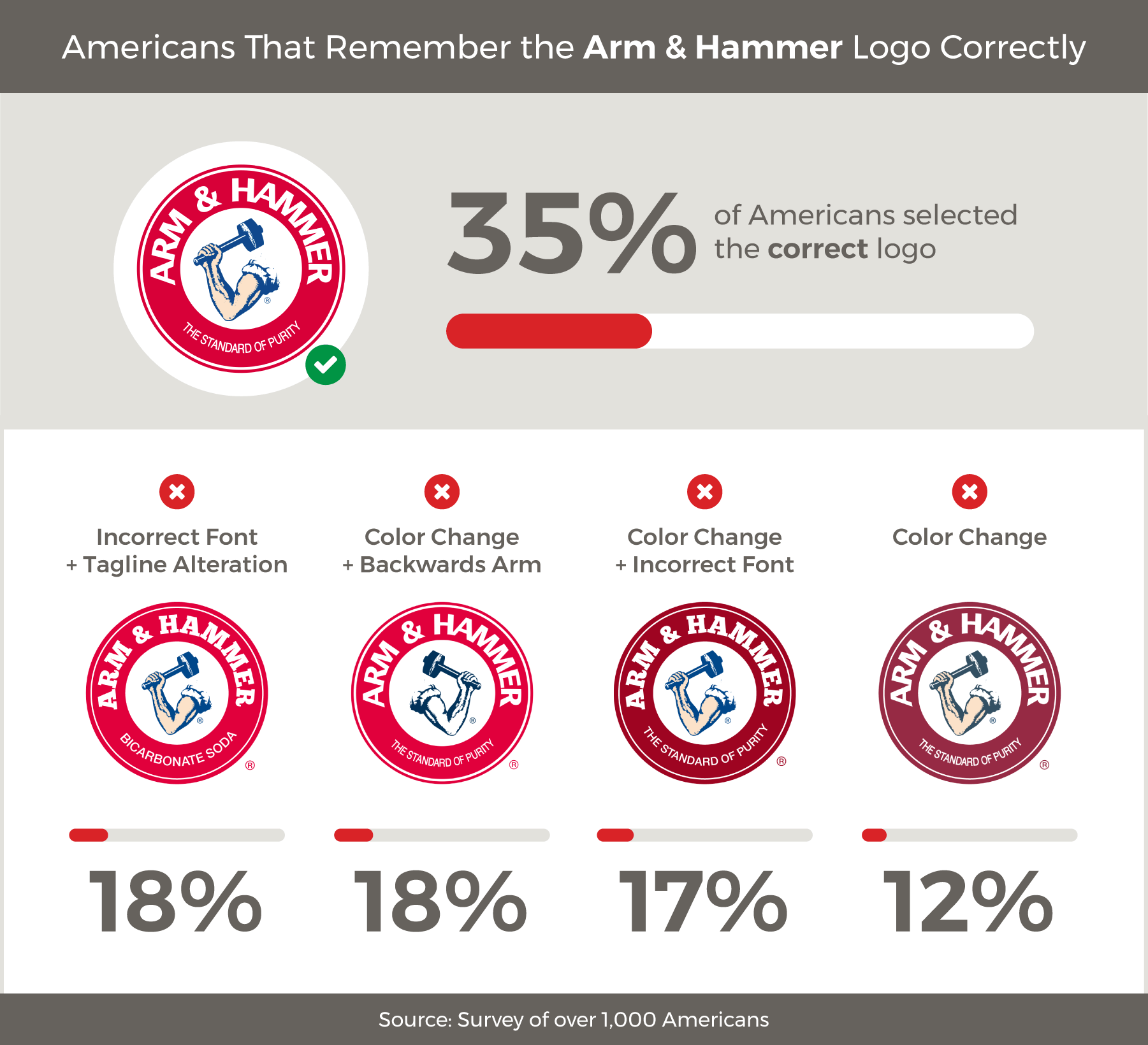 Breaking down the demographics, we found that men were more likely than women to choose a variation based on color. Additionally, surveyees ages 35 to 44 were more likely to recognize a combination of the color and font variation over other age groups. 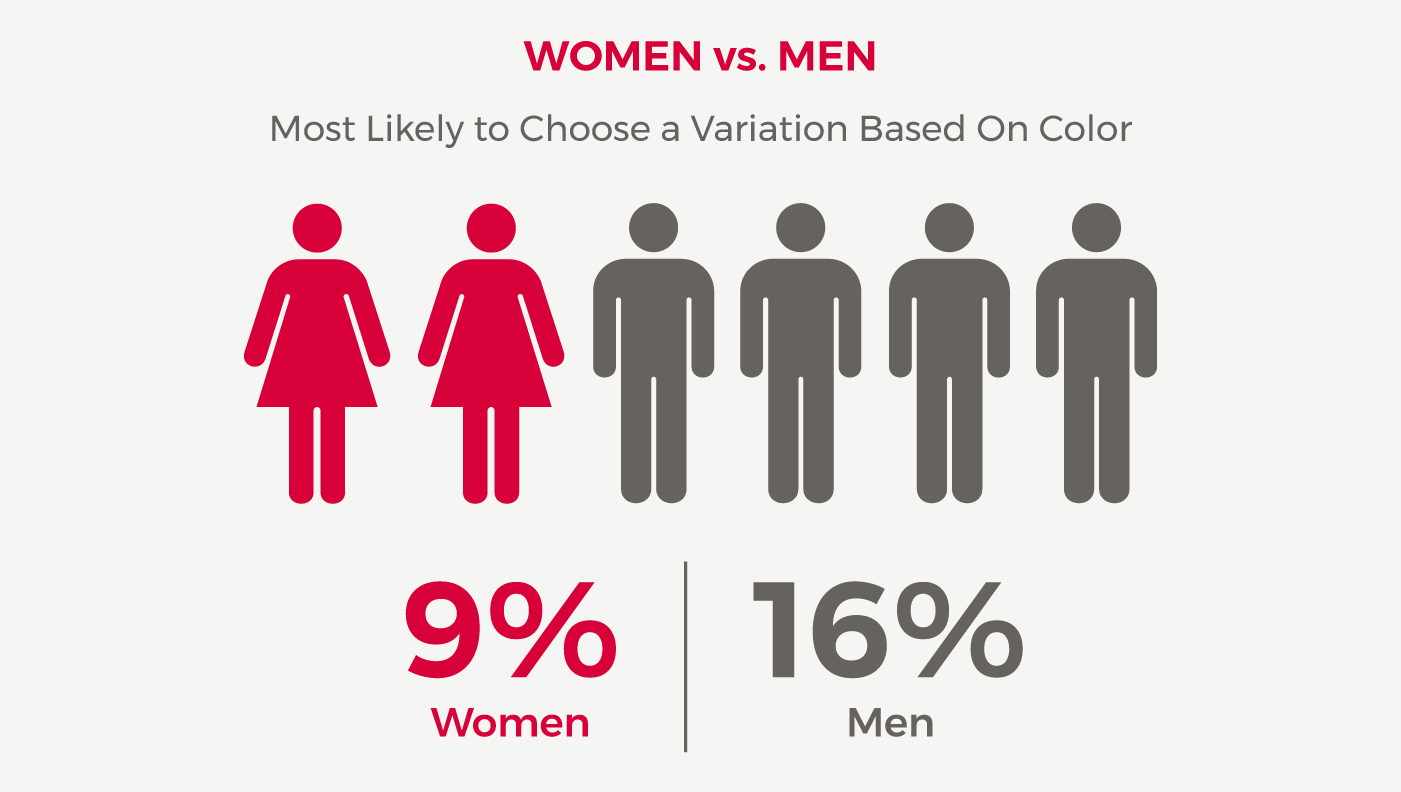 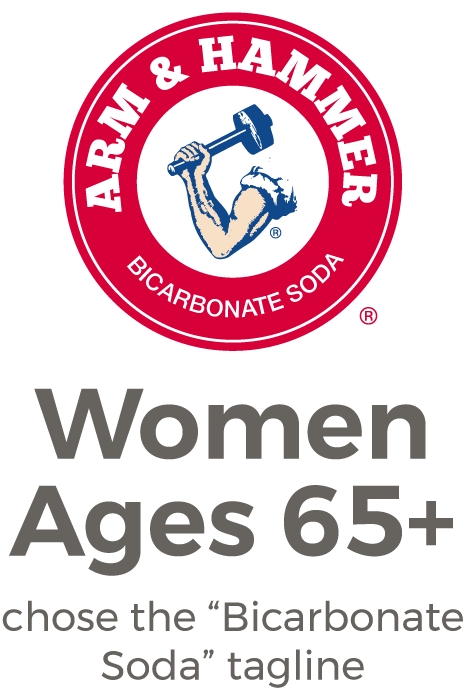 Interestingly enough, women born prior to 1953 were more likely to remember Arm & Hammer as a baking soda product choosing the tagline that read “Bicarbonate soda” instead of “Standard of Purity.”

Could it be the hundreds of thousands of likes on Facebook or simply the fact that Americans have been seeing the Arm & Hammer logo floating around their kitchens since childhood that make this such a recognizable brand? With a variety of uses and strong national presence, it’s no wonder that the majority of Americans, regardless of demographic, were able to differentiate the correct logo despite the variations we presented.

CHICKEN OF THE SEA

The phrase “Chicken of the Sea,” was first devised by fishermen as a way to describe the taste of albacore tuna. It was so successful in helping people recognize the brand that it didn’t take long to become the company name. Over the years, Chicken of the Sea has changed hands, moved shores and revamped its look, but it’s still what comes to mind when people think of canned tuna.

Chicken of the Sea started with a plain text logo, but added a blonde mermaid waving her wand in 1952, which is still a consistent feature of the logo today. When most people think of Chicken of the Sea, she is the first image that comes to mind, which is likely what the company planned to increase brand awareness. 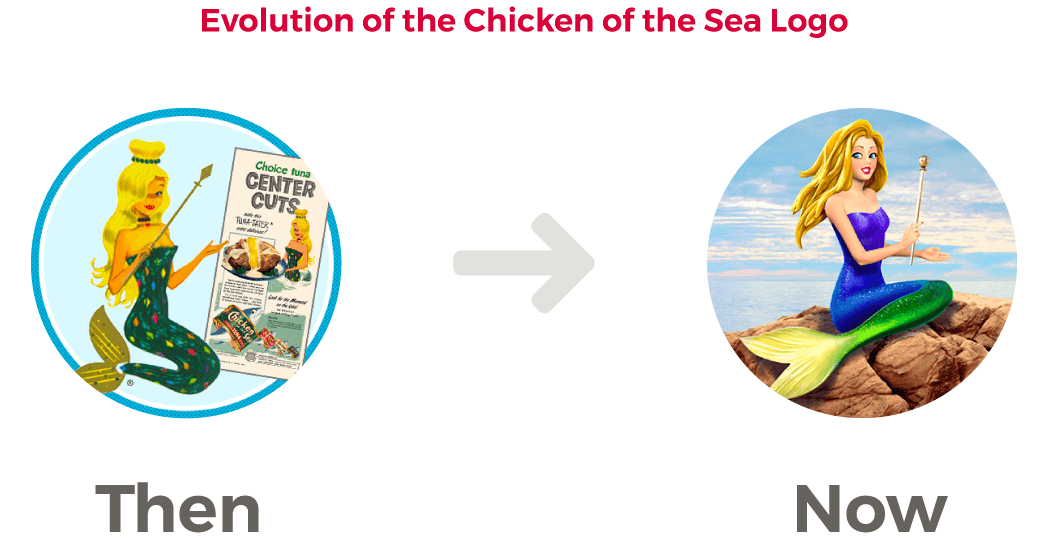 Despite the mermaid’s new looks over the years, our respondents largely remembered her for how she appears today, with one-third of surveyees choosing the correct option. Of those individuals, 22 percent remembered the mermaid perfectly, but chose a different option in color and style of font. 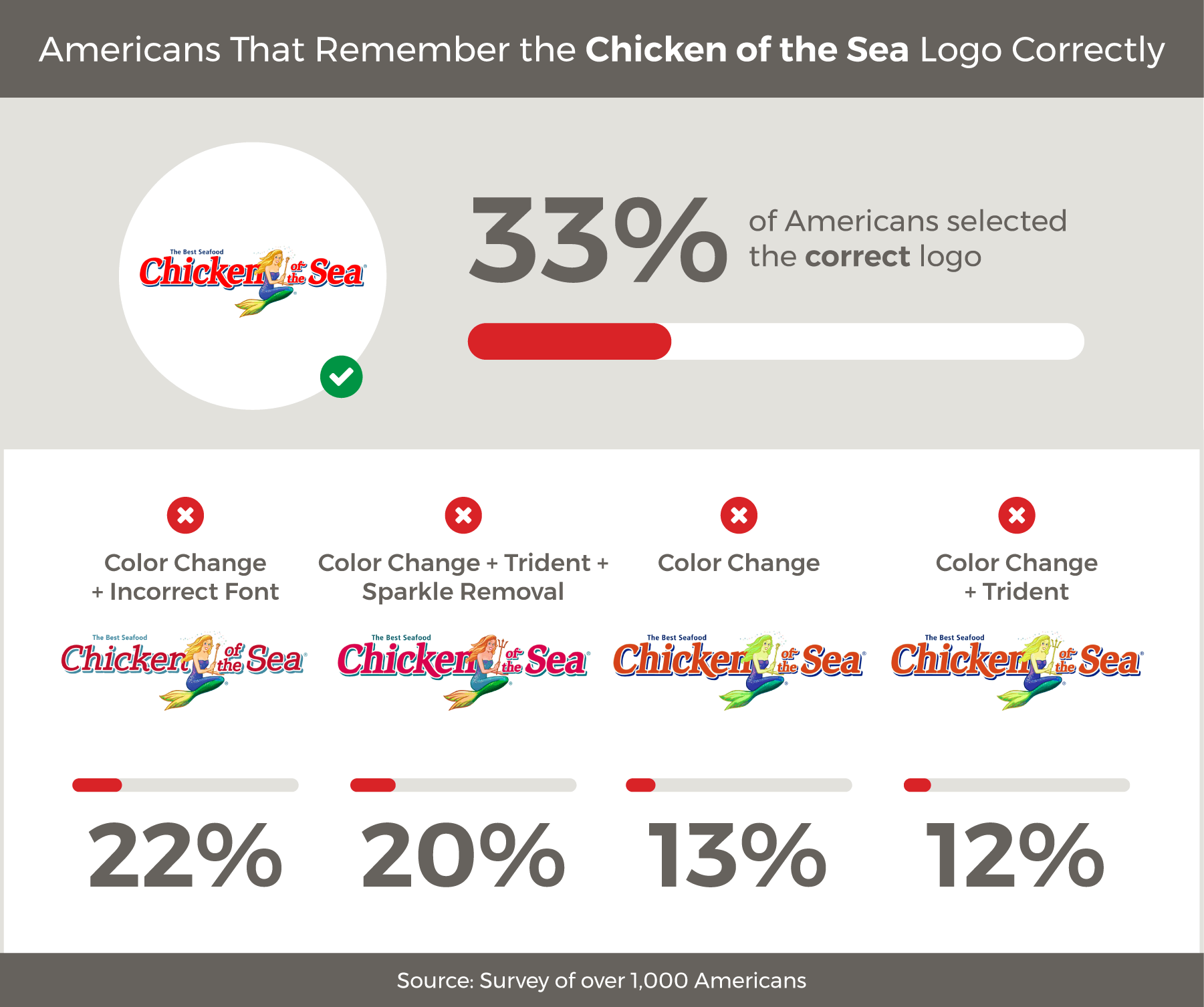 On average, millennials were most likely to choose the correct logo at 40 percent compared to 27 percent of Baby Boomers and older generations who chose correctly. This was especially noticeable in the male demographic, where older men chose the variations that depicted our alternative logos with changes in font, colors or design details of the mermaid.

Women’s responses had less discrepancy compared to the male individuals surveyed. The graphs below show how age played a role in men’s responses and what logo details were remembered most for each age group.

Despite so much change in appearance, the majority of Americans remember Chicken of the Sea for the friendly mermaid. Perhaps the catchy jingle “Ask any mermaid you happen to see, what’s the best tuna…Chicken of the Sea” or the “Mermaid on a Rock” commercials have made sure this brands logo doesn’t go forgotten.

From applesauce to mango juice, the Tree Top brand can be found in several aisles of the grocery store and lives in the refrigerators and kitchen cabinets of just about any household with children. It has kept up with demand and redesigned its packaging to provide mom’s with a peace mind when it comes to what they slip into their kid’s lunch boxes.

While Tree Top is a relatively new brand compared to others on this list, founded in 1960, the logo has still seen a bit of redesign over its short lifespan. Its look has included everything from a simple kids text logo, to a design that represents its grower owned roots that make consumers feel as if they purchased their apples straight from the orchard.

How did this brand fare in the logo challenge? Just like the others surveyed, we were interested to find out what details were most recognizable. To our surprise, the responses varied more than the other brands with only one-fourth of the individuals surveyed choosing the logo correctly. Others recognized our variation with italicized font and the plain text logo minus its lush surroundings.

While these font variations are a minor change, it was surprising to find that both women and men selected an alternative font option over the correct logo at 37 percent and 31 percent. While our redesigned color version was the least recognized, the 55 to 64 age group showed interesting results where women were three times more likely to choose this version compared to men. 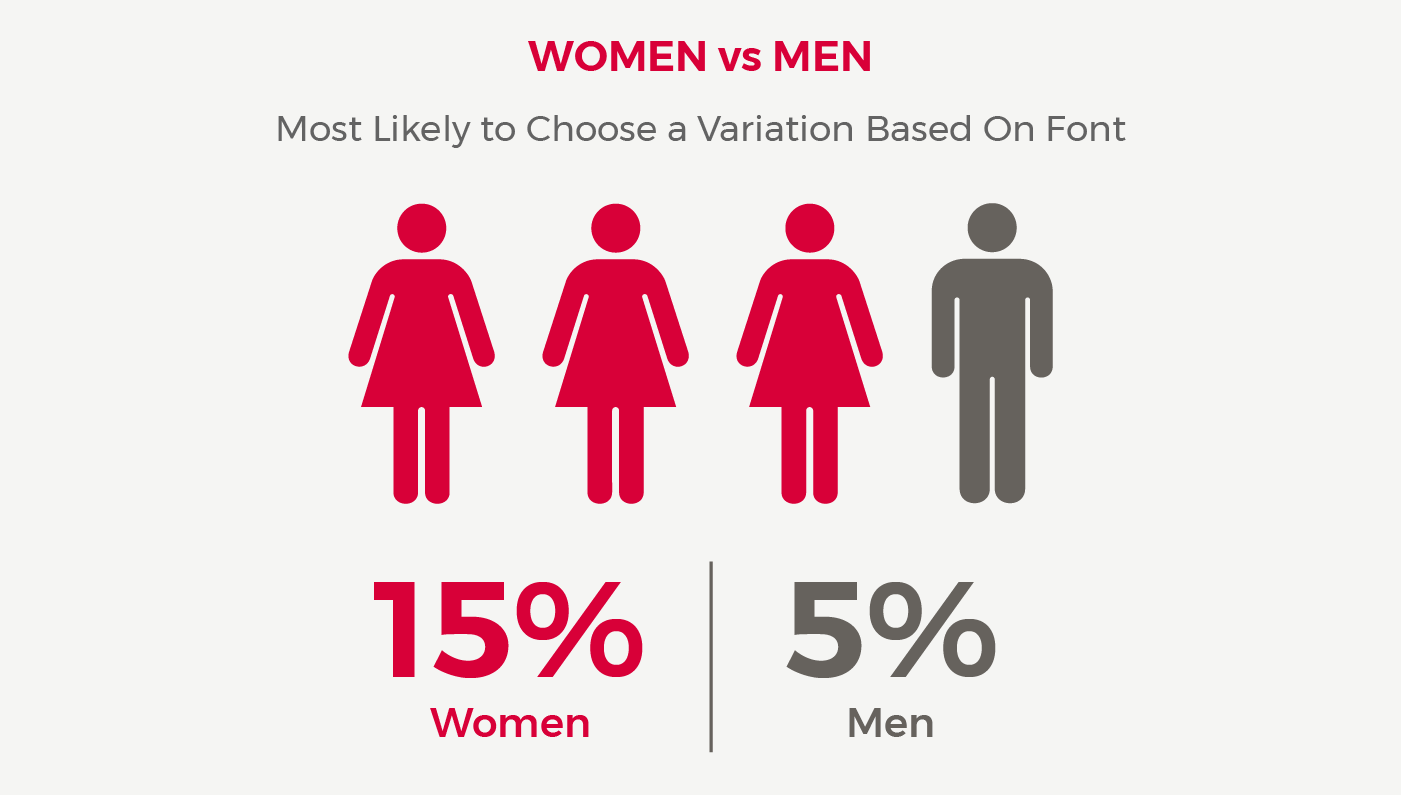 Surveyees across the board seemed to make more mistakes with the Tree Top logo choosing our font variation first, followed by the real leafy logo and, interestingly enough, a plain text logo. Perhaps it’s the brands young age and logo evolution that plays a role in the lack of recognition. Regardless, this kitchen cabinet staple wasn’t easily remembered in our survey.

To recap, does branding stick?

Based on our study, this seems to be the general consensus for household brands who have built trust over the years. The results show that the majority of Americans remember brand logos despite changes in font, color and small details. Of course there are a variety of reasons certain demographics may sway otherwise. This is often the case when companies have experienced rebranding or a series of logo changes over the years. On average, millennials may have a better time recalling a logo if the brand is younger or has targeted youth in their advertising, while older demographics may remember a brand with stronger roots. This was the case with Arm & Hammer, where women over the age of 65 remembered the brand for its bicarbonate soda product—likely because it was marketed to wives and mothers during the mid-century when more women were full-time homemakers. It’s important to remember that the way a brand positions a product can determine how it is remembered in the eyes of consumers for decades to come.